I’m hearing through the usual emergency department rumour mill that tear gas is not likely to be used in any G20 protests because of the logistical issues around decontamination in the very densely built-up areas in the “hot” zone. It gets into building ductwork, you see, and the thought of thousands of deranged, lacrimose bankers fleeing down Bay Street is too much, even for public safety officials. Pepper spray — well, that’s another thing, and it’s nasty. Here’s one description of what it does to you:

The effects of pepper spray are far more severe, including temporary blindness which last from 15-30 minutes, a burning sensation of the skin which last from 45 to 60 minutes, upper body spasms which force a person to bend forward and uncontrollable coughing making it difficult to breathe or speak for between 3 to 15 minutes.

Interestingly, both are designated as chemical weapons, and are banned for use in warfare under Article 1.5 of the Chemical Weapons Convention, under which Canada is a signatory.

In other words, we have no compunction using chemicals on citizens and civilians that are considered too inhumane for use on soldiers. 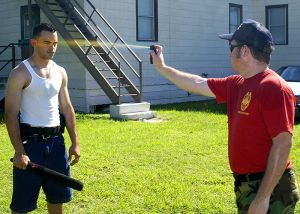 Not Suitable for Use on Soldiers

It’s important to recognize that both tear gas and pepper spray are not harmless adjuncts to law enforcement. Their billing as “non-lethal” is misleading, a cute piece of spin from the usual authorities. There have been fatalities related to the use of both pepper spray and tear gas, and people with other health issues such as respiratory or heart problems are especially at risk. Additionally, there’s evidence that both weapons can contribute to long-term health problems. Pepper spray can cause, according to a U.S. Army report, “[m]utagenic effects, carcinogenic effects, sensitization, cardiovascular and pulmonary toxicity, neurotoxicity, as well as possible human fatalities.” Tear gas has been associated with heart and liver damage, chromosomal changes, and miscarriages.

No, they aren’t quite harmless.

I’ll leave you with this quote from the New Scientist, May 1973:

Politician and scientist alike must accept the inescapable conclusion that any substance capable of producing an intolerable irritation at low concentrations must also produce a concomitantly high toxicity. In other words, the existence of ideal riot agents of sufficient safety not to impair the health of rioters or accidently exposed innocents is merely notional.

This entry was posted on Tuesday 22 June 2010, 0845 and is filed under Before I Start Throwing Things, I'd Better Write This Down, Health Care Policy That Matters to Nursing, Random Thoughts, Uncategorized. You can follow any responses to this entry through RSS 2.0. You can leave a response, or trackback from your own site.