The Brains Behind the Operation

Posted by torontoemerg in Cat Blogging, Life at Home on Friday 27 August 2010 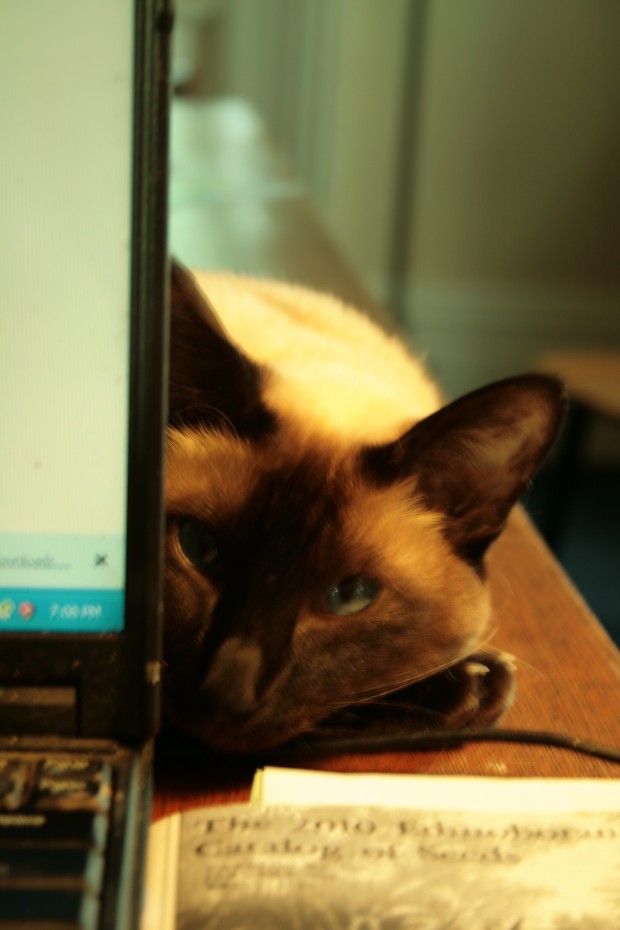 At least she’s not sitting on the keyboard.

Posted by torontoemerg in I'd Better Feel Sorry for Myself 'Cause No One Else Will, Life at Home, Navel Gazing, Random Thoughts on Friday 05 February 2010

The furnace is repaired. The cats have moved back to their accustomed places over the vents.

Some days, I think my entire existence, my work in the emergency department, the mortgage paid and bills settled, are for the benefit of the cats. In fact, I work for them. And the cats, cynical things they are, know it.

My New Favourite Word, Random Thoughts and Other Things I Don’t Understand

Posted by torontoemerg in Health Care, I'd Better Feel Sorry for Myself 'Cause No One Else Will, Life at Home on Wednesday 03 February 2010

1. File this under I Don’t Understand. Regular readers of this blog will know I am a fanatical handwasher, because handwashing is the best way to reduce the spread of infection. And yet, even though I was in charge the last four days, and had no direct patient contract — a sort of preview to the joys to come in April, I suppose — and even though I wash my hands with the frequency of Lady Macbeth (Out, out damn MRSA!), I still got some sort of gastro. Ugh. Disgusting.

Especially when I think of how gastros are spread.

2. File this under Funny. My colleague Darla contracted it too, and she’s just as OCD about handwashing as me. So she’s telling me how she’s all pukey and poopy, and she says this:

Darla: And then I called my husband and told him to pick up pads and Immodium.

Darla: Well, I’m not using them together!

Will, I think this would make a great couple of panels.

Well, I thought it was funny.

3. Which leads to my new favourite word. So day before yesterday, I thought I was sick, but decided it would pass because I felt moderately better, and decided to soldier on, came in and of course felt immediately, immoderately worse. There is an expression for this, which is my new favourite word: presenteeism. This describes the problem of coming in to work when you got, say, gastroenteritis or something, resulting in the hidden costs decreased productivity, not to mention spreading the ick to your co-workers.

Nurses are are one of the worst offenders, because, as I have pointed out before, hospitals in Ontario and elsewhere and are annoyingly stupid and actively punish nurses who call in sick.

4. Again I don’t understand. When I was younger I listened to classical music endlessly. Bach and Beethoven were my homies. Now I’m listening to punk/alternative. A lot. Is this normal? Shouldn’t it be the other way around? Or is it just weird? Or am I grasping at the lost threads of a misspent youth?

5. Permit me to winge a little. And yeah, my furnace died yesterday, so I’m sitting in front of the laptop sick, wrapped in a blanket, with the fireplace roaring and reassuringly blowing hot air up the chimney. Fortunately it isn’t cataclysmically cold here in Toronto, so the pipes probably won’t freeze before it’s repaired. I also have a little electric heater warming my feet, if my parasitical cats would stop laying in front of it.

What? They have fur!

Elegy for an Old Grey Cat

My old grey cat died today.
I thought he might when I went to work,
And paused by the couch where he lay
Panting, and stroked his matted fur, and when he mewed
I said good-bye.

I drove away, then got the call, “He’s gone —
I held him close when he died.”
And against the shining light of fall I cried
For an old grey cat we loved, perhaps too much, too well.

O God who minds the ways of men and mice,
And sees each sparrow fall (it’s said)
Have a thought, or care, or hope
For our old grey cat, well-loved, who’s dead.

Triage nurse: Do you have any allergies?

Patient: No — wait, I am allergic to cats. But I guess I don’t have to worry about cats here.

Triage nurse:  None of the feline variety, anyway.